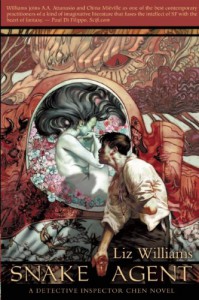 Not many books have moments that both intrigue and disgust me. At the same time. And not many books present these moments back to back with little respite in between for squeamish readers to settle their stomachs. That is to say this book is not for the faint of heart, especially not for those who can't stand the sight of blood and gore or sickness and decomposition.

On the back cover:

I don't usually read the cover's summaries anymore because of gimmicky taglines, but this one is a hilarious, yet strangely accurate description of how I pictured Chen.

Detective Chen Wei works for the Singapore Three police department and oversees supernaturally related investigations; he's also Earth's liaison between Heaven and Hell. Anything weird or out of the ordinary that happens gets sent to Chen's desk, but judging by the amount of weirdness and extraordinary things happening in Singapore Three, it's odd not to see the whole police department trained as supernatural specialists. We don't see or learn much about Heaven in this book, but we do get to go to Hell, several times over (all puns intended?).

"I'm going to need a leave of absence." [Chen said]
"To do what?"
"Go to Hell, sir."
There was a short pregnant pause, then Sung said, "You nicked my line, Detective."

The case is a puzzling one that's much more than it seems. A young girl from a prominent family has died of mysterious circumstances and now her ghost is missing. Her mother comes to Chen for help to send her ghost on its way to Heaven, where she belongs. Chen agrees to look into the matter, but finds almost nothing to go on. Then he finds out there's trouble at the family home and that the family may have questionable ties to Hell. That's when things get weird but in a fun, disturbing way.

The story is set sometime in the near future, and the location of Singapore Three is not mentioned. What is mentioned is the city has a large urban expanse, lively cityscape, coastal region, and a very soggy rain season.

The cast of supporting characters are well developed without seeming too forced or trope-like, and they add a lot of color to the plots and dialogues. Inari, Chen's wife, is a runaway who's literally trying to settle into her new life with Chen. The Badger, her faithful servant, is a grumpy play on the helpful animal sidekick trope. Seneschal Zhu Irzh, an investigator from Hell and Vice (same difference, really), who's on assignment to investigate Hell's side of Chen's missing girl case. Sargent Ma of Singapore Three PD is a squeamish cop who views Chen with suspicion and wants nothing to do with the supernatural, least of all Hell. Lao, the PD's exorcist and Chen's good friend, who's naturally suspicious of all things Hell. And a few more characters too spoilery to mention.

The idea of Heaven and Hell as bureaucracies is amusing to me, and the political struggles of both sides is great. I find the way Liz Williams writes about the denizens of Hell who are stuck in these mind-numbing, paper-pushing thankless bureaucratic jobs just hilarious. Given that Williams' background as an ambassador's underling, it's no wonder she's captured these nuances so perfectly, right down to the disdain for the office and the job at hand. Of course Hell is a public office drowned in tedious paperwork, but Heaven too? I look forward to Williams' version of that.

It seems Williams' take on Chinese mythology and death magic is a point of discussion (derision?) among readers. Personally, I find her portrayals interesting and familiar like an homage to classic East Asian tropes. Some might say they're appropriative though, which I can understand where they're coming from. A few of her descriptions of skin, eyes, and hair seem too forced as though she tries too hard to set a specifically Chinese or East Asian tone in the writing. Her descriptions and metaphors of buildings, streets, offices, and tea, however, paint a nice picture of Chen's adventures.

Williams has done her research for this book and seems familiar with beliefs and practices of death ceremonials; many of the elaborate beliefs are neatly tied into character development and the practices, into plotting. Having these traditions show up at various points in the book help to explain the long-winded processes of death, the afterlife, reincarnation, and the interconnections of Heaven and Hell to otherwise clueless readers. I think Williams did an admirable job incorporating so many intricate pieces of Chinese folktale and mythology together to tell a colorful story.

A point where I think Williams' writing shines the most

It was just past six, and the sun was already sinking down over the port in a smear of fire. Chen boarded the first available tram, and stood in the midst of a packed crowd of commuters, noting the exhaustion that seemed to hang like a miasma over each figure. No wonder people seemed to have so little time these days to devote themselves to considerations of the afterlife, Chen reflected,  and no wonder Hell was getting out of hand. Even twenty years ago it was still common to see the small shrines outside each door, and for old people to speak of the gods as real, living presences. Now, paradoxically, the other worlds were closer than they had been since ancient times; with new technology to speed up all manner of communication, yet people seemed to take less and less interest in spiritual matters. Perhaps it was simply too much to bear, Chen thought; perhaps it was too much to ask of people to concern themselves with something other than the daily grind. Whatever the reason, it did not make his work any easier.

I'd like to thank Carol for upgrading to the hardcover version and passing on her paperback copy to me.

I now own two copies of this book and am willing to part with the massmarket paperback edition, which is still in pristine condition. If anyone is interested, let me know and I will pass it on, n keeping with traditions. :)