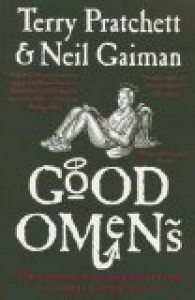 If British humor, especially British apocalyptic humor, is not something you enjoy, then look elsewhere.

I like the concept, I like the writing, and I like the story overall; however there were certain time periods that dragged on for a couple chapters too long and a few subplots stayed past their welcome. The cast of characters were fun though, and the dialogue was quick and clever (without being punny) and hilarious at times (again, without being punny). These things appeal to me because I enjoy British humor and a chatty meandering narration, but if you don't find them amusing or even interesting, then you might have a hard time getting through this book.

That's also to say I had a hard time getting through this book (notice the date read). Even though I liked almost everything about it, there were a few things that made for slow reading. For example, the sequence of events following the opening "baby switching debacle" was most difficult for me to get through. I found Adam's formative years to be quite a drag, not because this subplot was poorly written or too British for my understanding, but because I just don't like reading about overly precocious children in general. I often find these kinds of stories about clever children to be a bore, regardless of the strength of prose or story (a matter of personal taste). Once I got through Adam's childhood and adolescent years though, the story picked up speed and I couldn't wait to get to "the end of times." And what a ride that was.

This book is the first Neil Gaiman book that does not end in disappointment for me. I think Terry Pratchett must have helped a lot on this front.