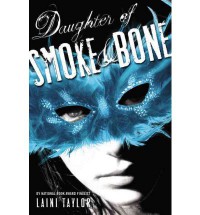 With that said, I enjoyed this book, but at times, it was too YA for my taste, but now I can see why people gravitate toward Taylor's writing. It's engaging and different from the usual flimsy YA urban fantasy fare. It's heavy on adventure and character development and light on romance and romantic interest.

Since this book is only one part of the mystery, I will stick to listing things that worked or didn't work for me as a reader (who has an aversion to YA).

- World building. The story starts in Prague, and just when you're about to get comfortable and settle in, you're plunge into mystery and Elsewhere.

- Sensory descriptions: the otherworldly gothic-ness of Prague, the bustling market of Marrakech, the feel of breezes or heat on skin, tingling or prickling sensations, warm soft pastries, the sensation of flying, tangible loneliness

- Pain: both physical and mental, especially thebeheading scene, this was gruesome in a page-turning way

- Magic. Although we do get glimpses and short explanations, we still don't know how the magic system(s) work or how Brimstone'sresurrections work yet.

- Wishes. I find the very idea of wishing and the wisdom of hoping fascinating or rather I find most of everything Brimstone says fascinating.

- Brimstone and the rest of the shop.

- Surprisingly uplifting quotes such as this one: "You were true to her, even if she was not to you. Never repent of your own goodness, child. To stay true in the face of evil is a feat of great strength" (Brimstone).

- Izil. Poignant and quoting dead philosophers one moment ("Have you ever asked yourself, do monsters make war, or does war make monsters?"), and remarking on their wisdom and "exceptional" mustaches the next.

- Angels. I'm neutral on this because, on one hand, it's angels, but on the other hand, no biblical references or tie-ins. So the hands cancel each other out.

- Beautiful creatures. This is not a critique of how beautiful the creatures are in this book, but rather a point I need to make about these things plaguing urban fantasy. Why do most creatures in YA need to be impossibly beautiful? (No sympathy for fugly ones?)

- Origin mythology. Too rushed, needs more explanation. Why are there so many Chimera tribes? How did they come to be? What is the reason for their various animal parts? Hopefully all will be explained in later books.

- [ETA] High human Chimeras valued/envied for their looks.I don't understand why this would be. It would make more sense, since Chimeras hate the Seraphs, that any creature resembling the enemy physically would be caste off or disdained for their looks. It doesn't seem congruent with what we know about Chimera's knowledge of humans.

I'm curious enough to pick up the second book, but I heard it also ends with a cliffhanger and the third book has no release date yet, so I think I'm gonna wait.

My initial rating upon finishing this book was a solid 3 stars, a strong 3 stars, but now that I've had some time to think on it and compare it to other YA books, I'd have to say this book is better written. So 3½ or 4 stars, depending on my mood of interpretation.