Review: I Am Legend 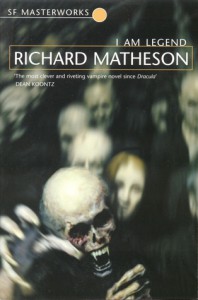 So this is the vampire outbreak that started the zombie outbreaks.

Matheson adapts a minimal, "economy of words" style to capture Neville's loneliness and desperation, and in turn, this limitation of unnecessary words makes the story precise and narrows the scope of the world in which the story is set--post-outbreak Los Angeles. Although I understand the purpose of a limited style, I would have liked to spend some more time with Neville and his past. His story seems unfinished the way it is. His mind is a cluster of grief, guilt, abandonment, hopelessness--all very apocalyptic things--and it's a wonder he's managed to stay alive and functioning for this long. So there's still room in the text to explore the few reasons that keep him going when he himself knows that it's the end of the world.

The events at the end happen too quickly. As the writing rushes toward the climaz, it seems as if the story is collapsing in on itself. Perhaps that's what Matheson was going for, and that the collapse of style and structure mimics the circumstances of Neville's end.

(Un)fortunately, I saw the movie before I read the book this time, and it's a whole different creature in its own rights, which screwed up my reading experience because Will Smith as Neville is more charismatic than actual Neville from the book.

The movie has a few things going for it that the book lacks. Will Smith, for one. Another is the scenes with the dog, which are only a few paragraphs in the book. In the movie though, it's a series of interactions and the most intense scenes, to me, because the dog, the only "human" contact Neville has, signifies what little joy and hope he has left in the world. But then the dog dies. You don't start feeling utter despair until the moment you realize the dog will die. And then it happens shortly thereafter. There is no joy or hope in the book and, perhaps, that's what the end of humanity should feel like.

Another problem is the audiobook, narrated by Robertson Dean, from Blackstone Audio is also good. There's a sense of self-deprecating humor depicted in the narration that's not present in either the book or the movie. When you catch on to his sense of humor, Neville becomes less of a "last man on Earth" caricature and more of a person because you're able to see (hear) him laugh at and berate himself all the while fighting off psychosis. Dean does a great job "showing" how palpable Neville's loneliness has become over the months he's survived by withstanding constant attacks from the infected. What stands out the most for me is the way in which Dead slows down the narration at certain moments during a scene and emphasizes them with harsh whispers.

The "I am legend" paragraph is very well performed, and with that, Neville's story comes to an end as a new "humanity" takes shape.

I'd never before been interested in a single text enough to seek out all of its adaptations. This book is a first. Next up, The Omega Man.