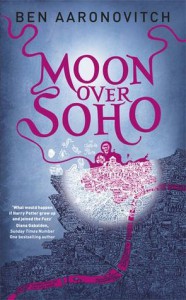 With “moon” in the title and a setting like London, I was expecting there to be a werewolf tale or at least the very least a shapeshifter subplot, but this a story about Soho and jazz… and murder and magic and supernatural forces and things beyond our existential control, but mostly Soho and jazz. So of course, my favorite kind of urban fantasy. You won’t even miss the lack of werewolves at all.

Once in a very rare while, an author’s writing style syncs up with all the qualities which I look for in a genre. When these things overlap, reading becomes less of a task and more of an experience. Ben Aaronovitch’s writing is everything I look for in urban fantasy. I had an inkling shortly after finish Rivers of London that that was the case, but I wasn’t certain until this book.

When a good book takes you a step further into the realm of experience, the feeling I associate with reading is similar to returning home after a long trip away. And that was what it was like for me all through this book. After finish Rivers of London, I took a break to explore other genres and fictions and they were interesting, but the moment I picked up Moon Over Soho, it was like I was home again. Even though I’ve never been to London and only know of it through media representations, Aaronovitch’s London feels like a familiar place.

There are a lot of things I like about this book and a handful of things I have issues with, which are somewhat “resolved” in the end. I won’t get to them though because they are huge spoilers.

Peter Grant is still a fun protagonist to follow about. You get to follow him around all corners–and alley ways and rivers and creaks and abandoned buildings–of London during the investigation. He has a peculiar, yet entertaining, way of describing present-London while dropping chunks of past-London into the narration. I enjoyed these moments the most because my interest is often peaked and I end up looking all of these references up as I’m reading. They add perspectives which I otherwise would not consider to the story, and ultimately following Peter around London feels like getting an underbelly tour of Soho.

Peter’s magic takes on a more prevalent role in this book as he grows as an apprentice, an absurdly easily distracted apprentice, but still. Aside from beginner’s magic and Latin practices, Peter is also introduced to a new type of sinister magic and the possibility more like it exists. It’s more sinister than what we’ve seen in Rivers of London. It’s interesting to note that, while Nightingale is the Master Wizard, he often takes a supporting role in Peter’s investigations due to his recent injuries and Peter ends up doing most of the legwork, which is why he’s often sidetracked. But he gets well on his own.

Peter’s family and his interactions with his mom and dad are sweet while being realistic. Although his parents have limited screen-time, every scene they appear in show a glimpse of the family’s true dynamic and Peter’s biracial background. It’s a testament to Aaronovitch that he can write this family with an honesty and sense of care that I rarely see in genre fiction and almost never in urban fantasy. Even when Peter is taking the reader around London on a lead, in between snark and satire, he would often mention the influence his parents had and still have on him, both his personality and behavior. When the family is together, you can see that Peter takes after both of his parents. I find this endearing.

Wow. This is turning out to be a very Peter-centric post. That’s because I can’t really talk about anything else without giving the mystery away. I can’t even mention Simone, even though every blurb already has. I can’t even talk about the specific type of sinister magic which Peter encounters without revealing the ending. I certainly can’t bring up Molly due to the nature–or mystery?–of her being. What I can say is this story takes the reader back to a prolific time in London’s past that still has an effect on the London of today. That’s not too vague, now is it…

Like in Rivers of London, the narration and dialogue are great fun and quick-witted. Peter’s funny when he’s narrating or on his own talking to himself, and he’s hilarious when Nightingale is around. The two of them have that old-world meets new-world dynamic that’s perfect for Peter’s comedic timing.

“Assuming he was a practitioner,” I said.

Nightingale tapped his better knife on the plastic-wrapped copy of the Principia Artes Magicis. “Nobody carries this book by accident,” he said. “Besides, I recognize the other library mark. It’s from my old school.”

“I really wish you wouldn’t call it that,” he said.

“You can’t call them black magicians,” I said.

“You realize that we’re using black in its metaphorical sense here,” said Nightingale.

“It doesn’t matter,” I said. “Words change what they mean, don’t they? Some people would call me a black magician.”

“You’re not a magician,” he said. “You’re barely even an apprentice.”

I could see him trying to parse the phrase but he’s colored in a way that wouldn’t cause offense and failing. I put him out of his misery by shaking his hand; my rule of thumb is if they don’t physically flinch from touching you, then eventually they’ll make the adjustment.

All jokes aside, there is something that still bothers me and that’s the casual use of the word “Jap” to refer to anything Japanese. In this case, a sushi restaurant. Here in the US, it’s a racial slur that dates back to WWII and the Japanese concentration camps. In the UK though, I don’t know how this word is used or whether or not there is tension behind the usage. Aaronovitch has been respectful of diversity and racial discourse whenever he brings up Peter’s biracial identity and Peter’s mother’s Sierra Leonean background, so perhaps the word “Jap” doesn’t carry the same racial tension in the UK as it does in the US...?

And another thing, I find it hard to believe that Peter, whose mom is Sierra Leonean, would refer to Africa and also the Middle East as “countries” when grouping both with other actual countries like China, Russia, and India. I will excuse this as an editing slight, but if something like it happens again, it will be very disappointing.