The Bad Beginning (A Series of Unfortunate Events, #1) 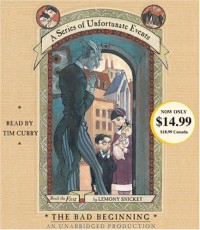 I read this series when it first came out and loved it while almost everybody else was hung up on Harry Potter. For some reason, I could never get into J K Rowling's writing (there was something about her storytelling voice that put me off), but I was drawn in to this series almost immediately, and it left a huge impression.

This book stands the test of time, even though hasn't been that long ago since it was written—a little more than a decade. Both the writing and story translate very well to audiobook format because the story is written in a style that mimics the oral traditions of fairy tale—original fairy tales where actions have consequences, not those sickly sweet Disney versions.

One of my favorite things about the narration back then was how it always opened a chapter with an anecdote that led into the story and how it stopped occasionally to define an unfamiliar term or explain a particularly complex grown-up problem, like how grief and loss affect everyone differently and how some people never recover from such an experience. I don't fine these short interruptions as fascinating as I used to, mostly because I'm older now and have lived through these experiences, but I still think the interruptions are a necessary part of the story.

Plus, Tim Curry as narrator. Can't pass that up.