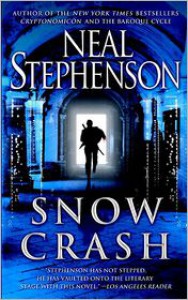 This is one of those books you should read with a group. There's a lot of information to process and dissect, and you'll wish you had people to discuss them with. I read it for a book club and my little group's reaction to the ideas presented in the text was eye-opening, to say the least. We had a series of great discussions (and a few screaming matches that got us kicked out of a cafe. The maitre d' was shocked that we were "only a book club").

First of all, the story opens with a high-octane pizza delivery that could very well give you whiplash. The whirlwind pace of the narration doesn't last though—fortunately or unfortunately? It slows down to a manageable speed after establishing an adequate sense of the world and then moves on to character and plot development.

The story is set in a near-apocalyptic future that's entrenched in technology, corruption, and violence. This alternate world is both alien yet familiar. Much of the world is divided into segregated enclaves, many of them controlled by global corporations and interest groups—sounds familiar, yes? Crossing borders without proper documentation can get you shot on the spot.

Main events kick off with the main character, Hiro Protagonist—ha ha—on his way to deliver a pizza in record time or else. Like borders, pizza is also a serious business in this world. Everything is serious business in this world, in a very tongue in cheek style. The pizza delivery sequence lasts about a couple of chapters and then the story moves online to the metaverse—live-action internet—and onto the mystery that is Snow Crash.

Snow Crash is a virus that renders systems, both virtual and physiological, incapacitated after an individual comes into direct contact with it. Someone, or a group of someones, has been sending this virus out, via decoys in the metaverse, to target and take out top hackers/programmers. There's a huge conspiracy simmering at the heart of this story because that's what happens in stories about impending apocalypse. I won't even attempt to sum up the rest of story. Will have to come back to it at a later time.

The tone is very... there's certainly a late-80s/early-90s feel to it. If you recall blue chip technology and the early days of the internet with fond memories, you'll enjoy the early chapters. They bring back a certain "charm" that I associate with that era.

Most of the fun is in Stephenson's use of language, which gives rise to a romping narrating style. He made up most, if not all, of the metaverse lingo, and I think he even predicted how we'd speak of the internet, about the internet, in the internet, while on the internet. If the narration had kept the pizza delivery scene's speed and rhythm going throughout the story, this easily would have been a 5-star rating. Easily. Because any book that can maintain such a pace for 470 pages while telling a coherent story deserves a standing ovation.

On the other hand, info-dumps. This book is essentially a series of huge info-dumps squeezed into a story about IT and inherent systems failure. Stephenson's version of a near-apocalyptic world is hilarious on the surface, but once you delve deeper into the narration, you can see he's raised a lot of fundamental issues to the surface. He doesn't specifically take a stand on anything, I don't think; instead, he lets you string narratives together to make sense of them. I can't say what these issues/narratives are exactly because, from my book club experience (screaming matches and all), interpretations vary across readers and individual experiences. Everyone takes something away from the story, and we pick and choose the issues that stand out most to us. My thing was religion (or religious scripts) as an infectious viral weapon of mass destruction. That, among other linguistic things, was the hook that reeled me in.

Flash and gimmicks aside, is this book worth reading? Yes, I think everyone should give it a try. Highly recommended for when you're stuck at the airport or family functions, or stuck anywhere really, and you want the hours to fly by.

The story doesn't actually have an ending. It just ends abruptly. Just something to kept in mind. Made me think I bought a defective copy until I checked online and found that other people had the same problem.

It's important to know an author's political standings / leanings / inklings / opinions / involvement before diving into a text, especially ones like this book. It would be beneficial to know where Stephenson stands on the issues of race, immigration, and integration. I think having this knowledge in mind can help the reader understand and dissect what's actually written on the page. Context is everything.

There's no denying this book is a nerd power ballad.